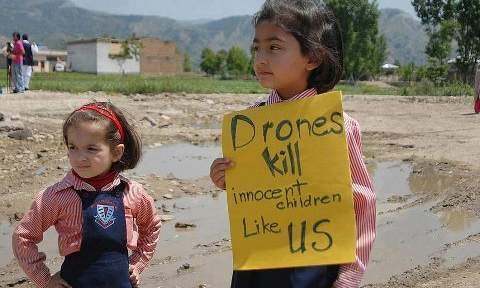 In addition to addressing the issue of U.S.-sponsored drone attacks overseas through rallies, demonstrations, statements, Interfaith Communities United for Justice and Peace organizes events, such as the April 10, 2013 justice luncheon honoring Medea Benjamin, author of Drone Warfare: Killing by Remote. All this is done to spread awareness of the horrors of war that our government is guilty of.

Below you will find a video, titled "Living Under Drones," which details the high level of civilian causalities, which include women and children, and the deceitful rhetoric that we hear about drone strikes being accurate and more efficient.

Our partners CODEPINK have been one of the main organizations in the battle to stop drones. To get more involved with them, visit their website and help in passing a Drone Resolution that would limit the use of drones. Here is the draft resolution on drones.