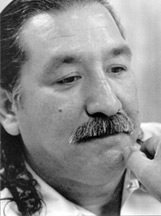 We, the Interfaith Communities United for Justice and Peace (ICUJP), urge you to grant executive clemency to our nation’s longest held political prisoner, Leonard Peltier.

We applaud your granting of clemency to the three remaining members of the Cuban Five and to 46 federal prisoners whose drug sentences were draconian. This took courage, as the forces that opposed each of these acts of justice are strong and often ruthless. Mr. President, you showed you are able to find that courage in yourself.

You have declared to the indigenous people of our land, “In a spirit of true partnership and mutual trust, my Administration is committed to respecting the sovereignty of tribal nations and upholding our treaty obligations.”

Have you not heard often enough these tribal nations urge, “Mr. President, please send Leonard home”? And of those violent attacks on Pine Ridge Reservation – culminating in the shootout of which Judge Gerald Heaney wrote “the United States government must share in the responsibility” – were they not a most egregious disrespecting of the sovereignty and violation of treaty obligations?

The ICUJP was founded in Los Angeles in the days following the attack on the World Trade Center. As people of different faiths came together to stand against the expected revenge attacks on our Muslim sisters and brothers at home and abroad, we declared, “Religious communities must stop blessing war and violence.” In the fourteen years since then, we have met weekly to oppose violence in the Middle East and on the streets and in the prisons of the United States.

As an interfaith group, we heed the words of Pope Francis, “It is essential to show special care for indigenous communities and their cultural traditions… For them, land is not a commodity but rather a gift from God and from their ancestors who rest there... When they remain on their land, they themselves care for it best.”

We are aware that Mr. Peltier, who vowed at the age of fourteen to serve his people, is serving his two life sentences because COINTELPRO had decided three years earlier to “neutralize” as many AIM leaders as they could, in order to facilitate the taking of resources without their resistance.

Mr. President, we are deeply troubled by the violent attacks on the traditional people of Pine Ridge, of whom Mr. Peltier was acting in defense. We are disturbed about a trial that would put a dictatorship to shame. We are horrified by the assassination attempt on Mr. Peltier’s life by federal officials, as well as the dangerous medical and nutritional abuse that daily threatens his life.

The granting of executive clemency would be a necessary first step in healing Mr. Peltier and the indigenous people who carry on the struggle to defend the land.

Mr. Peltier’s defense has exhausted all legal appeals, and he is denied parole because he shows no remorse for the crime he didn’t commit. This leaves it up to you to bring him some measure of justice.

We are appalled at this consistent denial of appeals and parole. For example, in an appeal filed after the defense learned that the gun alleged to have been Leonard’s had been tested by the FBI and shown to be not compatible with the casings found around the two bodies, the judges wrote, “There is a possibility that the jury would have acquitted Leonard Peltier had the records and data improperly withheld from the defense been available to him in order to better exploit and reinforce the inconsistencies casting strong doubts upon the government's case." Yet they denied the appeal, lacking the courage to stand up for what they said they believed.

But one of the judges denying his appeal, Judge Gerald Heaney, wrote in a clemency request, “At some point, a healing process must begin... Favorable action by the President in the Leonard Peltier case would be an important step in this regard."

Mr. President, we fully acknowledge a difficulty facing you as you consider this clemency request: To grant it to him not as an act of mercy but rather an act of justice means acknowledging that the FBI, COINTELPRO, our federal courts, prison officials and other branches of our federal government have at times been shameful. However, in such a case, you can either deny the truth or you can say, “Look, in the past, terrible injustices happened, but now we are determined to make things right.”

We have always admired leaders who can acknowledge past offenses.

Finally, Mr. President, we of the ICUJP hope that you will not wait till the last days of your administration to do this. Mr. Peltier’s health is poor; his freedom is urgent now. Please remember that every day you delay is another day of unjust suffering for an innocent man and for the many people who love him.