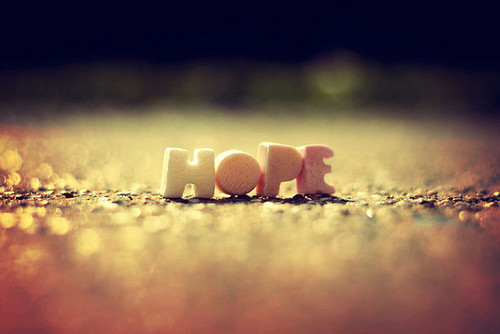 One week later I drove back to my office after a Friday ICUJP meeting in a very different state of mind. When I tried to put my finger on it I realized that I was filled with hope. Hope. In fact, not only did I feel better, but I realized I had a topic for my Reflection today.

Hope. In that intervening week, the financial condition of ICUJP had begun to improve. We had had a very energizing meeting of the Tool Box Committee. There was a renewed sense of purpose and direction, not only about our April 15event, but beyond that in terms of reaching out, defining our own destiny, taking the lead, gathering others of like mind to join us.

Hope. In the Bible, Hope is one of the Three Virtues, along with Faith and Love (Or Charity). Hope was personified in Greek mythology as Elpis. When Pandora opened her box she let out all the evils except one: Hope. The Greeks (and later Friedrich Nietzsche) considered Hope to be as dangerous as all the world's evils. Nietzsche called Hope "the most evil of evils because it prolongs man's torment."

Not everyone agrees with Nietzsche. Martin Luther wrote that "Everything that is done in the world is done by hope." And Martin Luther King Jr said "We must accept finite disappointment, but we must never lose infinite hope."

A man who knows a lot about the struggle for political freedom and social justice, Vaclav Havel, had two very important things to say about Hope.

He wrote: "Hope is a state of mind, not of the world. Hope, in this deep and powerful sense, is not the same as joy that things are going well, or willingness to invest in enterprises that are obviously heading for success, but rather an ability to work for something because it is good."

And he wrote that: "Hope is not the conviction that something will turn out well, but the certainty that something makes sense regardless of how it turns out."

ICUJP was built on Hope. The Hope that a small group of people of different faiths could gather together and encourage others to join them for the common purpose of convincing religious communities to stop blessing war and violence. Hope that 5, 10, 30, 50 people meeting and organizing week after week could harbor the audacity - the Hope - to change the world, starting with ourselves and our ignorance and prejudices toward one other, then reaching out to a wider circle of friends and family, then our congregations and communities, then our cities and state, then the nation and the world.

All of us who are devoted to ICUJP and what it stands for understand what Dr King meant when he said that "Our lives begin to end the day we become silent about things that matter." Or when Archbishop Desmond Tutu said that "If you are neutral in situations of injustice, you have chosen the side of the oppressor." Or Albert Einstein when he said that "The world is a dangerous place to live; not because of the people who are evil, but because of the people who don't do anything about it."

Yet we return week after week. And in between we devote ourselves to the tasks we have accepted or ones that have been thrust upon us. And the next week we return. Drawn here like iron shavings to a powerful magnet.

In January 1776, when the struggle for independence from the tyranny of England was looking futile, one man, Thomas Paine, wrote a simple pamphlet called "Common Sense," which immediately spread through the colonies and ignited great Hope. Paine's words then speak to us now. He wrote: "The harder the conflict, the more glorious the triumph. What we obtain too cheap, we esteem too lightly; it is dearness only that gives everything its value. I love the man that can smile in trouble, that can gather strength from distress and grow brave by reflection. 'Tis the business of little minds to shrink; but he whose heart is firm, and whose conscience approves his conduct, will pursue his principles unto death."

At ICUJP we smile at trouble and gather strength from distress. We grow brave by reflection and we do not shrink. Our collective heart is firm and our consciences approve our conduct. We are Hopeful and we give each other Hope. That's why we come here. That's why we love ICUJP. But our Hope is not passive. We will not remain silent or neutral in the face of evil. Hope breaths life into our actions. Hope sustains us to the day that peace and justice prevail at home and abroad.