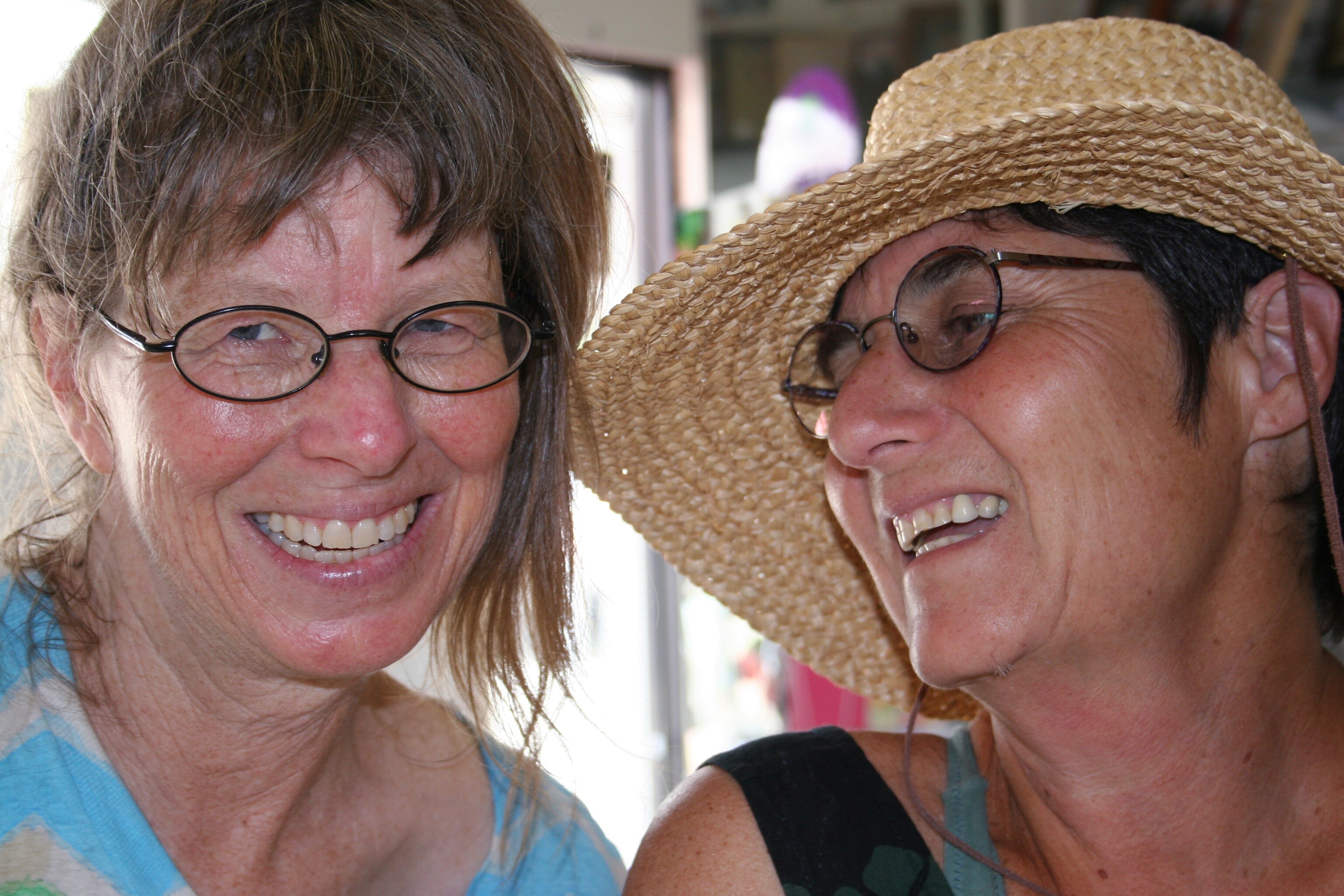 I am going to reflect this morning on 29-and-a-half years of friendship. I remember. It was a moment of joyous laughter at something that had just happened, and Paula exclaimed, “I love my life!” This was among the reasons I first started introducing her around as my best friend.

But let me go back to how we met for our first times – all three of those first times. A crowd of us strangers were walking back from MacArthur Park to our cars after a march and rally when a woman among us told us that she was a stripper. After taking delight in our reaction, she explained that she worked in a print shop, where her job was to cut sheets of colored film with an X-ACTO knife, a process called “stripping.” But when Paula told another group of us that same story years later, it was Zing! I realized I had met this woman before, walking back from the park that day.

The second time we met was when I was co-organizing a reception with a young African American woman named Midge, who suggested that we use her living room and have her sing with a friend of hers.

Flash forward again. My new friend Paula was taking me around to meet all the activists living in the building that her parents owned and she lived in. She knocked on a door (which was across the way from the unit I’m living in now), and a Frenchman opened it. “I know you!” I exclaimed (there not being that many Frenchmen in the movement in L.A.) “I met you at an reception for Eddie James Carthan, and you were taking tickets at the door, and Midge and that white woman sang those freedom songs and they were so beautiful together!”

“Yes” he said, pointing over his shoulder into his living room. “That event took place right here. And the white woman who sang with Midge was Paula.” So I came to realize that I had met Paula twice before.

The third time was just before that in May of 1987 – we know because the date was printed on our “Jobs, Peace and Freedom” t-shirts, and because in May of 1997 we had a celebration with lots of friends in Sycamore Grove Park.

I had planned to go to San Francisco for the march with other members of the Human Rights Committee of UTLA, but the carpooling didn’t happen, so I called CISPES to find out if they still had space on their three rented busses. Don said, no, but that a woman he had high regards for was renting a van to take people. So we talked on the phone, this Paula and I, and when I knocked on her door that night before the trip, my old friend Ricardo answered. Wow! Even Ricardo Zelada knows this Paula person!

The next morning the two of us were getting to know each other sitting in the front seats of the van. Now, anyone here have a clue where Sunland-Tujunga is? Right, all our friends. Whenever I tell anyone I’m from Sunland, I always expect to be asked, “Where’s that?” Practically the same neighborhood, Sunland and Tujunga are in northern L.A., up against the hills of Angeles Forest.

So here we were, two Angelinas going up to San Francisco to march for jobs, peace and freedom, and she says to me, “I know you have probably never heard of it, but I grew up in this place called Tujunga.” She glanced from the road for a moment to see me sitting in shock. “I’m from Sunland,” I responded.

I’m two years younger than she is, and we were further separated though my five early years in a Catholic school. And yet, several of my friends from my ballet class were her buddies, the mother of the male dancer I had a crush on was her girl scout leader, and my brother once dated her next-door neighbor.

Now there’s a line from Shakespeare that I’ve always quoted as describing so many such weirdities in our lives, “If this were played upon a stage now, I could condemn it as an improbable fiction.”

As it turned out though, although Paula and I grew up about three miles from each other, we lived on the opposite sides of the world. I was a child in a Republican family with the mindset created by the McCarthy machine; she was a red diaper baby. I grew up in a strictly red-lined world where I rarely saw and never spoke with a Black person until seventh grade; she grew up going to Communist Party picnics where her parents made sure she had kids of many ethnicities to play with. I stayed apolitical throughout the sixties in college; she grew up going to rallies and remembers her mom holding meetings in her home to organize People’s College of Law. I never heard of Joseph McCarthy until college; her dad was blacklisted and couldn’t get work for years.

Opposite sides of the world.

I mentioned how white my world was. That was until Mr. Talbert – a Black teacher in our public school with no Black students – turned a classroom full of anti-math kids into enthusiasts within our first few days. I once told Paula how fortunate it was that he was so great because, had he been anything less, it would have set the movement back. She replied that her mom had been one of those who had sought out the best they could find and got the principal to hire him. Thank you, Lee.

When I met her, Paula was organizing in the Venceremos Brigade and going to Cuba. Then, Brigadistas were called upon to organize a mass movement in support of the Revolution; Paula took up the call and brought together her friends – including her new one – to form the Coalition in Solidarity with Cuba. We organized an initial event and passed out fliers for it as our contingent joined the march to welcome Nelson Mandela, carrying the banner, “Africa called, Cuba answered.” I remember several people taking our flier, reading it as they walked off, and returning to ask, “Two of the organizations listed here are the Communist Party and the Socialist Workers Party; how did you get them to work together?”

That was Cuba. That was Paula.

So I have been to Cuba a mere eight times; Paula actually lost track of her trips but, when she once did a quick count, she came up with fifteen. I remember before my first trip to the island, I was in México on sabbatical and I went to the Cuban Consulate to get my visa. The young Cuban diplomat looked at my passport and exclaimed, “You’re Paula Solomon?!”

Now, over the years, Paula and I have been together so much that people here have been known to come up to her at an event and ask her, “Hey, Carolfrances, is Paula here with you?” (Like we look so much alike, right?) But here I was in the Cuban consulate with this young stranger. It took Mario a moment to realize that he was looking at the page where my emergency contact info was listed.

Our Coalition in Solidarity with Cuba lasted throughout the nineties – with more collaboration among groups including the CP and SWP – till people started moving on to do other work, like in solidarity with the new Venezuelan revolution, and Paula and I found ourselves the only ones showing up for meetings. But it was a great decade of work.

I continued teaching, but Paula had left the printing trade to take advantage of an affirmative action of the International Brotherhood of Electrical Workers recruiting women and people of color into their apprenticeship program. She became active in her new union, particularly its Electric Women branch, and in WINTER, Women In Non Traditional Employment Roles. She was our yearly guest at my school’s Career Day in Watts where she inspired girls as well as boys to consider being electricians when they grew up, to be active in their unions, and to always wear protective gear on the job. This last point she would make by putting her hard hat on a child’s head and clunking it with a metal tool.

She continued working as an electrician till arteritis forced her into early retirement, but we still look at the lighting in the Central Los Angeles Library and in our local train station and know she is partially responsible for our being able to see in there.

After that, she became active in the school her mom had helped to found, by becoming the unpaid registrar at People’s College of Law. And after she retired from that, she started accompanying me here on Friday mornings.

And so, Paula, I know it is six days early, but happy 70th birthday.