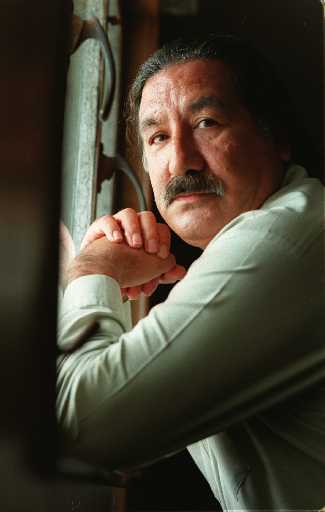 What Leonard and AIM (the American Indian Movement) are about is the honoring of their treaties. In this map of the Fort Laramie Treaty, this is Montana, Wyoming, North Dakota, South Dakota, and Nebraska. The yellow shows what was reserved to the tribes forever, the orange what was left to them only nine years later after gold was discovered there, and the red the five impoverished reservations now left to them.

If this and other treaties were honored, our indigenous sisters and brothers would not suffer from such poverty, police violence, and incarceration.

So, this is not just for Leonard. You see, he is serving his two life sentences because COINTELPRO had decided three years earlier to imprison or kill as many AIM leaders as they could, in order to facilitate the taking of resources without their resistance; the struggle to free Leonard is, therefore, in defense of indigenous people – and of the Earth.

This quote is, for me, what it’s all about:

“...it is essential to show special care for indigenous communities and their cultural traditions... For them, land is not a commodity but rather a gift from God and from their ancestors who rest there... When they remain on their land, they themselves care for it best.”

That was from Pope Francis.

When I originally wrote this out, it came to 20 minutes. So I’m skipping over the details showing how the FBI instigated the violence that led to the deaths of two agents and one Indian and then coerced, bought, withheld, and fabricated testimony, while inflaming racism in the jury. I’m skipping to the part that I was close to while it was happening, the part that shows what kind of man he is. Anyone here remember hearing about Standing Deer?

So, here is an Indian man in prison who – in return for desperately needed medical attention, a parole, the dropping of some outstanding charges, and relief from beatings and death threats – agrees to help “neutralize” Peltier. The government’s plan was that he would gain Peltier’s trust, convince him to escape, and deliver to him weapons and tools, so he could be shot when he went over the wall.

So how about this for a movie scene?

Picture this: Standing Deer meets Leonard for the first time and hears how, in response to a woman on the rez pleading for someone stand up to defend their starving families, this 14-year-old boy vowed to spend the rest of his life doing just that.

By the end of this first meeting with his target, Standing Deer breaks down and confesses to Leonard that he has made the deal to help kill him. Leonard smiles and says, “Thank you for telling me, my brother.”

Does that sound like it should be a scene in a movie?

OK. Cut! Next scene: Leonard and another inmate take Standing Deer into the prison law library. Leonard blindfolds himself, his friend ties Leonard’s hands behind his back and leaves. Leonard tells Standing Deer to move a bookshelf in front of the door. When he finishes doing so, Standing Deer turns and finds Leonard lying on floor, smiling gently.

Leonard directs him to find a hand-made knife rolled in newspaper hidden behind a row of books.

"Do whatever it is you have to do, my brother," Leonard tells him. Standing Deer falls to his knees, cuts the rope, pulls off the blindfold, and finds Leonard in tears.

Does it sound like there’s a movie in this?

So, later when it becomes obvious that the government has lost faith in Standing Deer and has sent in another assassin, Leonard attempts an escape but is caught.

I remember Leonard’s escape trial in Los Angeles. The year that Standing Deer was first being approached, I was working on the offense/defense committee of Skyhorse and Mohawk, two AIM members we helped win acquittals for. Then some of us tried to keep the committee going – around Big Mountain and other causes of Indian solidarity. Suddenly, Leonard was here for us to defend.

Along with an Indian womanfriend, Lois, I worked on media, putting out nightly press releases. (There’s a story there, too, but...)

I was asked if I would visit Leonard and his co-defendants in jail. Of course, I did. In Leonard’s trial, the judge ruled inadmissible the reason for his needing to escape; he was convicted and had more time added to his two life sentences. But in a separate trial for the outside man convicted of aiding the escape, Judge Robert Takasugi not only paroled him immediately, but said he knew he was not dealing with "a common criminal but a man with very deep human dimensions...I see no sin there. In fact, any person who does not possess empathy and concern for the way the Indian has been exploited and mistreated, in my opinion, is a moral dwarf."

I remember sitting there in that courtroom hearing Takasugi read his long list of demands on the government; he wanted answers: Did Standing Deer actually have seven serious charges dismissed? Was it was unusual for him with his maximum-security classification to be suddenly transferred to a medium-security prison? I remember asking myself as I listened, what if Takasugi had been Leonard’s judge in his trials?

Later, Leonard’s escape sentence was overturned, but he’s received no other justice from the courts, not even with an appeal filed after the defense learned that the gun alleged to have been Leonard’s had been tested by the FBI and shown to be not compatible with the casings found around the two bodies.

No appeal nor habeas corpus would succeed even after judges wrote, “There is a possibility that the jury would have acquitted Leonard Peltier had the records and data improperly withheld from the defense been available to him in order to better exploit and reinforce the inconsistencies casting strong doubts upon the government's case." Even in stating this, they denied his appeal.

On top of that, they consistently deny him parole because he shows no remorse for crime he did not commit.

So the defense committee and so many supporters are urging, and I am urging:

Finally, I am concluding with a short poem:

We are not separate beings, you and I
We are different strands of the same being
You are me and I am you
and we are they and they are us
This is how we’re meant to be,
each of us one each of us all
You reach out across the void of Otherness to me
and you touch your own soul!

This is the poem, “We Are Not Separate” by Leonard Peltier.