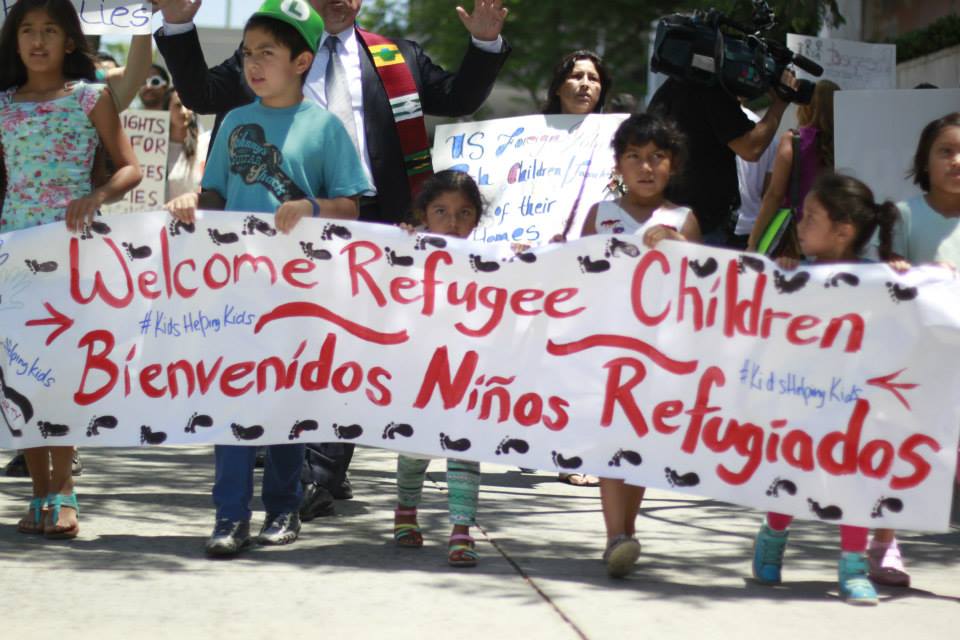 News of hundreds of refugee children detained by border patrol and packed in unhygienic and inhumane conditions caused an outcry as pictures and video were shown in the media. Shortly thereafter, the children were gathered into buses heading toward processing centers in Texas, in Arizona and Murrieta, CA.

These buses carried hundreds of immigrants, mainly children from Central America unaccompanied by parents, for processing in border patrol centers across the Southwest. These buses carrying children were met with cries and chants of hate, with callous and vicious signs, reading “Illegals Out,” “Go Back to Mexico,” “USA USA USA” and “Not our kids, not our problem.”

Interfaith Communities United for Justice and Peace (ICUJP) was founded in Los Angeles after 9/11 to support the work of faith leaders from Buddhist, Christian, Muslim, Jewish and other spiritual faiths and traditions who say: "Religious Communities Must Stop Blessing War and Violence." In our interfaith activism we have found various commonalities, one of the most important of which is the inherent dignity and worthiness of every single life in this world. We are all created with characteristics of divinity, comprised of a soul and the irrefutable birthright potential for happiness, for love and to seek and receive compassion.

What our government and its partner governments in Latin America are doing is a violation of this inherent value of every one of these children.

What propels these refugee children in making the deadly voyage to the U.S. is a desperate need to escape violence. But tragically, much of this violence has been caused by our very own government, either militarily or economically.

During the 1980s our government aided the repressive governments of Guatemala, Honduras and El Salvador, and much of that damage continues. At the end of the Central American conflicts in the early 1990s, our country’s hegemonic economic influence continued in perpetuating harmful neoliberal policies in Latin America with the Dominican Republic Central American Free Trade Agreement (CAFTA-DR) and the North American Free Trade Agreement (NAFTA).

We are only now seeing that outcome in the form of fleeing refugees.

So we call on all people of conscience and faith to demand that President Obama grant asylum to these immigrant refugee children. As our scriptures tell us so, we must open up our homes to the stranger, to the traveler, to the unknown companion.

Shakeel Syed, executive director of the Islamic Shura Council of Southern California, recognizes the teachings of the Prophet Muhammad (pbuh) which call for Muslims to allow neighbors and visitors into one’s home as a display of hospitality. Rights and fair treatment of immigrants is an extension of this divine practice.

The Muslim Public Affairs Council (MPAC) also understands the interconnectedness of us all, and how God has given all of us, God’s children, dignity.

In MPAC’s report, Ineffective & Unjust: Fixing our Nation's Broken Immigration System, it is stated clearly: “One of the key objectives of immigration reform is to ensure that individuals are not to be exploited and must be treated humanely and justly—regardless of nationality and legal status."

In Christianity and Judaism the call for compassion toward immigrants and refugees is also clear in Leviticus 19:33-34:

“When a foreigner resides among you in your land, do not mistreat them. The foreigner residing among you must be treated as your native-born. Love them as yourself, for you were foreigners in Egypt. I am the LORD your God.”

Stosh Cotler, CEO of Bend the Arc, the Jewish social justice organization, says that caring for immigrants is a Jewish issue:

“Some 2.5 million Jews arrived in the United States between 1881 and 1924. The fact is, many American Jews are only two or three generations removed from their first days in this country. But our experiences with immigration stretch far deeper than that. During Passover, the diaspora will recite the story of our exodus from Egypt on one of our most widely practiced holidays. Our Passover story of walking through the desert for 40 years in search of a new home is shared around Jewish dinner tables across the globe.”

Perhaps one of the better-known stories of hospitality and compassion toward the stranger, the traveler, is the quest for shelter as Mary and Joseph go door to door in an attempt to find a place to rest and give birth to Jesus in Bethlehem—eventually finding refuge in a manger. What can be said of the lesson here? Are we to turn away these immigrant children, these children of God, who come not to the U.S. for anything other than refuge?

It is a mistake to say that those refugee children on the buses being met with xenophobic hate are merely undocumented immigrants. No, they are each the representation of that which is sacred traveling from Mexico, El Salvador, Honduras, Guatemala and all other places where borders have triumphed in dividing the divine unity of people.

ICUJP calls on President Obama, Congress, the American people and especially the faith communities in and outside of the city of Murrieta to grant these children, these travelers, refuge. We call on all church, mosque and temple doors nationwide to open anywhere that undocumented immigrants may need aid, comfort and sanctuary.