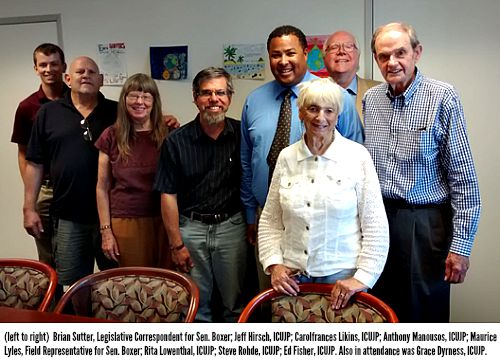 As the Senator's constituents, the delegates discussed their personal and faith-based observations regarding the Agreement and its significance to the Middle East and to the world, as a monumental breakthrough for negotiations among previously estranged nations in place of escalating threats of war.

The delegates also noted the devastating consequences of a unilateral failure of the United States to follow through with the Agreement.

Finally, the delegation asked that the Senator, in her role as a senior member of the Senate Foreign Relations Committee, take strong steps to extend the spirit of the Agreement to a renewed drive toward regional and eventual worldwide abolition of nuclear weapons, in cooperation with all Middle Eastern nations, and particularly with China and with Russia, where mutual suspicions and aggressive actions have so seriously impaired progress under the Non-Proliferation Treaty (NPT).

ICUJP is pleased to have opened a dialog with the Senator's Los Angeles staff, and we look forward to future communications with her office on matters of mutual interest where the Senator would welcome input and support from the Los Angeles-area interfaith community.