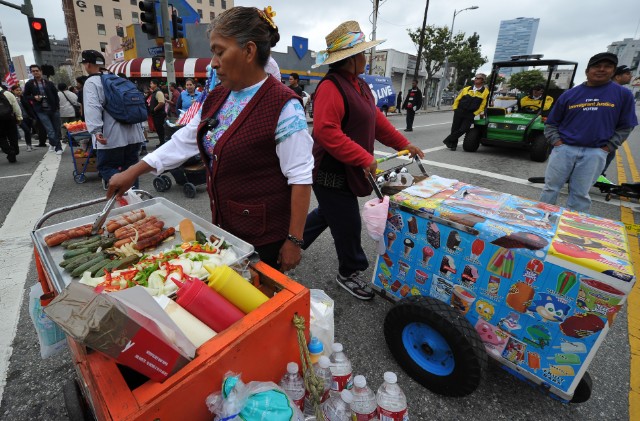 Since I had grown up in Costa Rica, Central America, I was accustomed to the sights of fruit vendors selling me papayas, and mangoes, and bananas from their carts. As a child, these had been horse-drawn at times, but through the years more and more of the vendors drove around in little pickup trucks. I also loved to run out and buy “helados,” homemade ice cream on a stick. But I had not ever considered these vendors as being part of the “informal” economy. To me they were just providing us with the things we needed! Thus my observations in Asia and Africa built on my home experience and I became interested in finding ways to help my friends leave behind this precarious, marginalized, income generating work, to move into the more stable sector of the economy.

When I returned to the United States I thought I would have to keep traveling back to the countries where my friends lived in order to pursue my interest. I was wrong. In 1998 I was asked to come and help the Institute for Urban Research and Development (IURD), the Association of Salvadorans in Los Angeles (ASOSAL), and the Cathedral Center of the Episcopal Church, set up the first sidewalk vending project in Los Angeles. Walking down Alvarado St. in the MacArthur Park area I felt as though I was in familiar territory. Vendors crowded the sidewalks, selling everything imaginable. I felt like I was in Ghana where you don’t need to go to the grocery store or any other store. Just walk the streets and you can pick up anything you need. That was (and is) MacArthur Park. So I accepted the invitation to join this group.

We began our efforts by organizing a Community Action Council, something mandated by the Sidewalk Vending Ordinance that had been passed by City Council in 1994. Composed of all types of stakeholders (business owners, the Diocese, public offices of parks and recreation, health department, police, religious leaders, non-profit developers) we thought we had a good chance of setting up the first sidewalk vending district. Our goal was to move those vendors out of the shadow where they worked and into the formal economy. After more meetings than I care to talk about (and you definitely don’t care to listen), we often would be discouraged as one stumbling block after another would surface.

I remember at one point sitting in Langer’s Delicatessen at one of the CAC meetings. We were pretty discouraged at the constant barriers we faced. Some of us said we wanted to give up. After listening for a while, Bishop Jon Bruno of the Episcopal Diocese (he was just a priest at the time) spoke up: “You may leave,” he said. “But as for me, these are my people. I will not leave.” We sat there stunned. That commitment and dedication was what the task demanded. We had to question whether we were in for that long run. We looked around, and one by one, said that we would not abandon the task. We, too, would persevere.

In 1999 we established the first Sidewalk Vending District in Los Angeles along Alvarado Street in MacArthur Park. There was much fanfare, much celebrating, big huge commitment on the part of enforcement to keep the illegal vendors out, lots and lots of training and capacity building workshops, lots of investment of time, energy, money. And a few years later, things were back again as though nothing ever existed. The restrictions of the ordinance made it impossible for vendors to be successful.

Among the lessons we learned: marginalized and vulnerable people need the support of large coalitions of other parties working together for a common cause as they try to defend their rights against strong government. There must be a coming together, a cooperative alliance, interdependent on one another, that can push through the barriers that are in the way. Part of the result of this kind of collaboration and participation is the building of community and the strong interlacing networks that hold the social fabric together.

This necessary cooperative alliance was in evidence on Tuesday (4/17) at L.A. City Hall. As the L.A. Times reported the next day, “legalizing vending has been a longtime dream of sidewalk sellers who have staged protests and packed hearings at City Hall. More than four years have passed since local lawmakers first proposed permitting and regulating the throngs of vendors who do business across the city. Last year, the city eliminated criminal charges for vending under the Municipal Code, but vendors can still get administrative fines. As the city has tarried in passing new rules to legalize sidewalk vending, many complain that the lack of legal approval has left them vulnerable to harassment and abuse. Business owners, in turn, lament that unregulated vending has run rampant in some areas. The Hollywood Chamber of Commerce said that the delay in passing new rules, along with dropping criminal penalties, had created a chaotic "free-for-all" on Hollywood Boulevard and left it dangerously congested.”

But Tuesday, street vendors triumphed; their voices were heard. CLUE P♀WER (the women’s empowerment branch of Clergy and Laity United for Economic Justice) has been one of the many groups that came together to push through a new stab at allowing these hard workers to come out of the shadow. We were there to witness history unfold at City Hall when the Los Angeles City Council voted 11-4 to approve a framework to legalize street vending in Los Angeles. The framework is being sent to the City Attorney who will draft an ordinance for final review by the City Council. Some council members tried to introduce amendments that would send it back to committee and thus cater to the desires of the business owners. But others, like Curren Price and Gil Cedillo spoke so eloquently and forcefully on behalf of the street vendors. And it helped that the chambers were packed! I was proud to witness this new stab at giving people a chance to work without fear.

I was reminded of the work of advocacy that we all do here at ICUJP. Our spoken word can mean so much. We of the interfaith community know very well the meaning words can have. Words we speak are extremely important for us; they carry a creative power. God said: “Let there be light” and there came light. Since we are created in God’s image, we also by faith should be able to speak to any dark situation and expect it turn into light. We create heaven on earth when together with like-minded people, we become instruments in making this world a better place to live in. Thus, seeing situations being changed for the better as a result of our best efforts, brings gratefulness and hope!

May peace reign in this place
And love forever hold you tight,
May the Spirit of God flow through your life,
And joy uphold you day and night.