Priorities and Actions in Support of the Poor People’s Campaign

Founded in 2001, just after 9/11, Interfaith Communities United for Justice and Peace (ICUJP) has been working tirelessly for nearly 17 years to uphold our mission that RELIGIOUS COMMUNITIES MUST STOP BLESSING WAR AND VIOLENCE. As people of faith and conscience, we have opposed war, torture, Islamophobia, economic and racial injustice, and all forms of domestic and systemic violence.

We assert that our faith traditions have in common the injunctions to love our neighbors as ourselves and to aid the strangers in our midst. We have promoted the use of diplomacy, negotiation, and humanitarian and peaceful means to resolve international conflicts, instead of war and military intervention, in Afghanistan, Iraq, Iran, Syria, Israel/Palestine and elsewhere. We have called on religious communities to oppose torture, solitary confinement and capital punishment. We have demanded that our government close Guantanamo and end drone warfare.

We have voiced concern about the intersectionality of poverty, police abuse/racial profiling, mass incarceration, and the poverty draft. Deeply committed to Dr. King’s values and goals, we are pleased to sponsor the Poor People’s Campaign and encourage you to consider these priorities and actions which we feel are important to address poverty, racism, sexism, homophobia, xenophobia, environmental destruction and militarism. We stand united for a world with dignity, peace and justice for all. 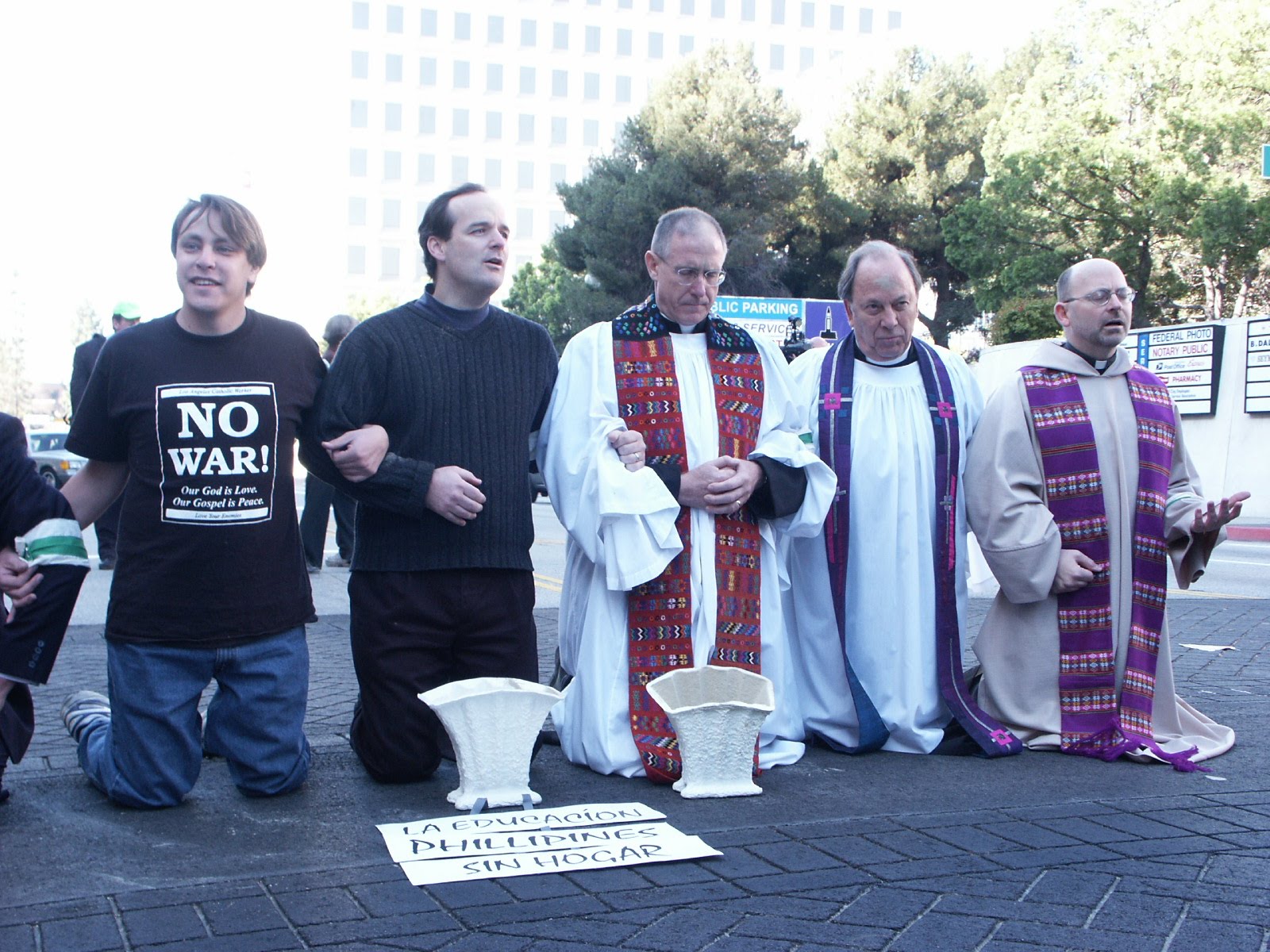 eeds over military and law enforcement spending. Reduce funding for jails, police and military and use funds instead for education, health care, infrastructure, science and the environment. Convert from a military to a peace economy. End poverty draft by providing free higher education and job training to all.
Peace through justice and diplomacy, not war. Reduce dependence on military. Support  the UN and international law. Direct international aid to ending disease and poverty. Promote nuclear disarmament and laws that will prevent the President from launching a preemptive nuclear -- or conventional -- strike without Congressional approval. Plan through community participation for conversion of military industry into manufacturing for civilian needs.
Housing and land justice. Repeal Costa-Hawkins Act to make rent control possible. Support a homeless bill of rights. Create an ample housing trust fund to build desperately needed affordable housing. Provide housing vouchers for all in need. Promote the concept of land stewardship rather than ownership. Support community land trusts. Educate, demystify and advocate for people without shelter in those neighborhoods and communities that refuse to accept them. Engage the interfaith community in opening the tent of hospitality within those same neighborhoods
Decolonization. Support indigenous rights here in US and globally. Overturn Jones Act and reform tax laws for Puerto Rico. End support for countries that colonize others.
Environmental justice. Respect Native American treaty rights to honor Mother Earth. Lower our carbon footprint to stop global warming. Convert from fossil fuels to renewables. Oppose the environmental racism of placing toxic plants in vulnerable neighborhoods. Convert from chemical-based agribusiness to organic farming. Protect forests.
Human and Civil Rights. Reform immigration laws with easier path to citizenship for all undocumented residents (not just DACA) and foster family reunification. Restore right to vote to released felons and those on parole. End cash bail. Support LGBTQ rights. End gender-based violence and human trafficking. End police violence through accountability. Free political prisoners. End for-profit prisons, capital punishment and torture. Full funding of rehabilitation programs and job training for those incarcerated, borrowing from the best practices in Northern European countries.
Election reform, promoting democracy. Enforce the Voting Right Act. End gerrymandering, voter suppression. Pass effective campaign finance reform: take money out of politics. Promote civil liberties, governmental transparency and the right of privacy for individuals.
Economic justice and income inequality.  Pass progressive tax reform that will make corporations and the rich pay their fair share. Ensure fair wages for women and other marginalized groups. Promote labor rights, especially the right of workers to unionize and work for safe and comfortable working conditions, livable wages and benefits, and paid vacations and maternity leave, full employment, shorter work week and six-hour day (with no loss of pay). Pay equal wages for equal work regardless of ethnicity, gender, language, place of birth or other considerations. Respect the right of workers to organize, unionize, strike and call for boycotts. Move towards co-ops and worker-owned businesses. End student debt by providing free education and job training for all.
Do you like this page?
Tweet