The Truth about Ken Burns' 'The Vietnam War' 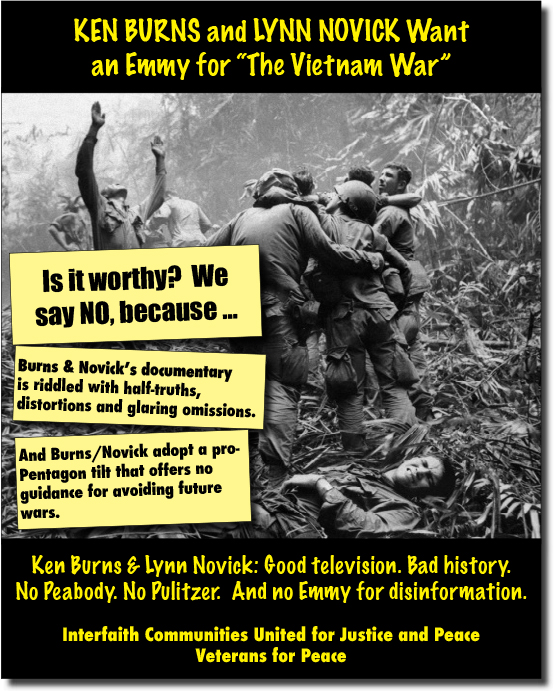 Last fall, PBS and Ken Burns presented an 18-hour documentary series, "The Vietnam War." At the time, Veterans for Peace, and other anti-war groups, stated their objections to many elements of the series, finding that it contained too many half-truths, distortions and omissions to qualify as an honest history of the war, and of the turmoil it caused on the American home front.

This spring, Burns and PBS began a PR campaign to win an Emmy award from the Academy of Television Arts & Sciences. As longtime opponents of the Vietnam War, and other American military disasters, ICUJP joins Veterans for Peace in publicly expressing our sincere belief that Ken Burns' "Vietnam" series is unworthy of the Television Academy's highest honor.

We acknowledge that Burns and co-director Lynn Novick are extremely skillful filmmakers. But we respectfully ask the Academy to consider whether "The Vietnam War" meets the documentary standards of accuracy and truthfulness. If we don't face the full truth of the Vietnam War, we will continue to allow our government to lead us into moral and military catastrophes, as it already has in Iraq and Afghanistan.

As owners of the public airwaves, and as American taxpayers, we take strong exception to the half-truths, distortions and glaring omissions in PBS' documentary series "The Vietnam War," produced and directed by Ken Burns, with Lynn Novick as co-director.

The series presents graphic film of combat; it provides a compelling musical soundtrack; and it gives the viewer lengthy, intimate interviews with combatants of the war. We get a strong sense of the horrors of the battlefield in Vietnam. But we see almost nothing of the terrible toll, inflicted on the rural civilian population, by the relentless bombing, shelling and strafing by U.S. air, artillery and helicopter attacks.

Burns & Novick's narrator declares, in the first episode, that the Vietnam War "was begun in good faith, by decent people." The Pentagon Papers show that to be a false claim.

The series shows strategic mistakes and miscalculations and false statements by politicians and military leaders. But there is a moral vacuum at the heart of Burns's vision of the war. He gives the viewer no sense of responsibility or accountability for the atrocious crimes that were committed by U.S. forces on a daily basis. And Burns & Novick strongly imply that the Pentagon has learned the lessons of Vietnam, and that US citizens can trust the political establishment never to start a war like Vietnam again.

In the end, in the last episode, Burns & Novick re-affirm America's innocence. One of their trusted witnesses, an Army Intelligence officer, declares, "It was a cause worth the effort … and sometimes the guys in the white hats don't win … but that doesn't take away from the rectitude of the cause." That statement is never contradicted in Burns & Novick's disingenuous history.

Burns & Novick exalt America's warrior culture and denigrate America's peacemakers. Burns/Novick's portrayal of the Americans who opposed the Vietnam War is shallow and shabby. They give us no sense of the anguish and moral outrage felt by the people who worked and marched and even risked injury and imprisonment to end the carnage.

Burns and PBS are actively campaigning for the Emmy award from the Academy of Television Arts and Sciences. We don't believe in censorship. But neither do we believe that a questionable history, which has already been widely broadcast, should be rewarded with high honors, like a Peabody or a Pulitzer or an Emmy award.

Burns' three biggest investor/backers are the Koch Brothers, Bank of America AND the Pentagon. The Pentagon made incalculable contributions of in-kind goods and services. The enormity of the Pentagon's backing for "The Vietnam War" is reflected in the end credits of each episode. There you will see a set of credits called, "The Producers Wish to Thank ... " At the top of that list is the U.S. Department of Defense. With overwhelming support from the Kochs, Bank of America and the Pentagon, it's not surprising that Burns favors the views of the military and the foreign policy establishment.

We, ICUJP, demand that PBS present other, more even-handed, views of America's war in Vietnam, and the domestic anti-war struggle that finally ended it.