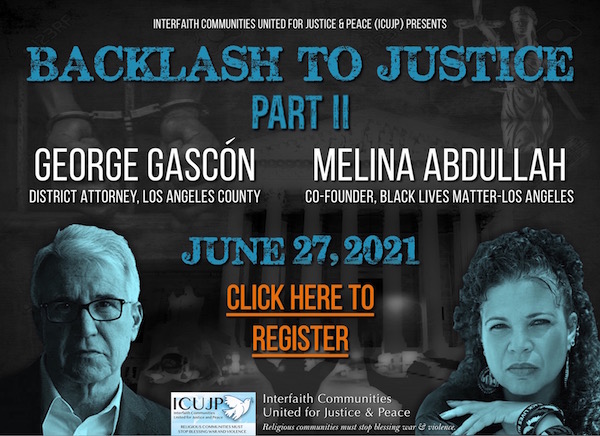 Free and open to all

This forum will continue the conversation from our first Backlash to Justice event in March. The conversation will include situation updates and discussion on actions that people seeking racial justice can take. Together, we can push forward needed changes in the criminal justice system and push back efforts to reinforce mass incarceration and other repressive, racist measures in the name of victims' rights.

In November 2020, George Gascón was elected Los Angeles District Attorney after promising to fight the “machine of mass incarceration,” end tough-on-crime prosecutions, free people from overcrowded prisons, and hold police accountable for misconduct. He defeated his predecessor, Jackie Lacey, who was under fire for her ties to police unions, refusal to prosecute police officers accused of abuse, and continued support for the death penalty.

Since taking office, DA Gascón has announced his department will stop seeking the death penalty, prosecuting children as adults, filing gang enhancements, and filing three-strikes charges (requiring life sentences). These changes provoked an immediate backlash. Law enforcement leaders statewide have launched a campaign to thwart DA Gascón’s reforms, including challenges from DAs and from the union of his own deputy prosecutors. Another campaign, backed by the LA County Sheriff, aims to recall him from office. The outcome of Gascón's reforms could significantly impact similar efforts across the U.S.

In 2020, Dr. Abdullah was a chief spokesperson for "Jackie Lacey Must Go!" - an effort to replace Lacey as Los Angeles DA, led by families of those killed by law enforcement with impunity. A womanist scholar-activist and prolific author, Dr. Abdullah is a recognized expert on race, gender, class, and social movements. One of the original group whose convening led to the creation of Black Lives Matter, she co-founded Black Lives Matter-LA and continues serving as a leader in the local and national movement.

Dr. Abdullah is Professor and former Chair of Pan-African Studies at California State University, Los Angeles. She is co-host and co-producer of the KPFK radio program Beautiful Struggle and has appeared on MSNBC, CNN, ABC, PBS, Al-Jazeera and other TV news outlets. She serves on the boards of numerous academic and community action organizations and is the recipient of a wide range of awards for her work in racial justice, human rights, and community service.

Jody David Armour is the Roy P. Crocker Professor of Law at the University of Southern California, currently teaching Criminal Law, Accident Law (Torts), and a seminar on Stereotypes, Prejudice, and the Rule of Law. A widely published scholar and popular lecturer, he studies the intersection of race, law, morality, psychology, politics, ordinary language philosophy, and the performing arts.

Armour’s latest book, N*gga Theory: Race, Language, Unequal Justice, and the Law, looks at America’s criminal justice system – among the deadliest and most racist in the world – through deeply interdisciplinary lenses. His award-winning book, Negrophobia and Reasonable Racism: The Hidden Costs of Being Black in America addresses three core concerns of the Black Lives Matter movement: racial profiling, police brutality, and mass incarceration. In addition to authoring numerous articles, Armour appears as a legal analyst on NBC, CBS, ABC, FOX, PBS, MSNBC, NPR, and many other media outlets.