Being held without a fair trial is torture 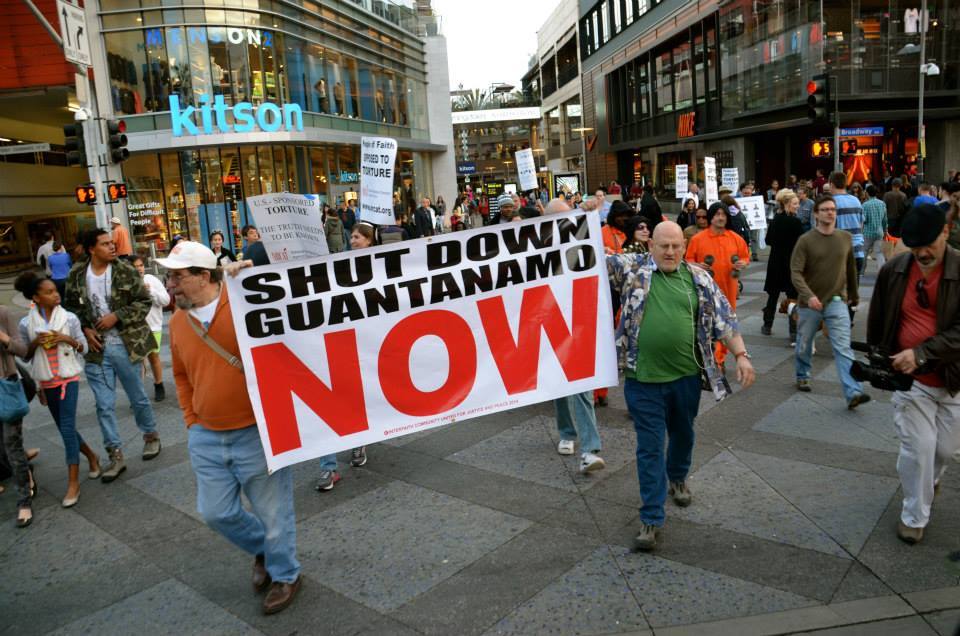 Interfaith Communities United for Justice and Peace demands that the U.S. shut down Guantánamo Bay detention camp, a promise that President Obama made during his first presidential campaign in 2008.

The National Religious Campaign Against Torture has several ways people can get involved.

1.) Send a letter to Congress and President Obama to urge the closing of Guantánamo Bay detention camp. Here is a sample email you can use.

2.) Write a letter to the editor of newspaper or news website urging the closure of Guantánamo Bay detention camp. Here are some talking points.

Interfaith Communities United for Justice and Peace (ICUJP) asked our resident folksinger, Stephen Fiske, and our videographer, Robert Corsini, to create this song and video for our third annual protest against Guantanamo held on Jan. 11, 2014. We are thrilled with the results and thank all those who supported this effort, particularly the National Religious Campaign Against Torture (www.nrcat.org).

I am introducing a music video project, Close Guantanamo, which I have just completed with filmmaker Robert Corsini. The project is based upon the popular Cuban folk song, Guantanamera -- and is dedicated to the life and work of the late Pete Seeger.

I feel his spirit with this project.

When I first heard the song "Guantanamera" performed by Pete Seeger many years ago -- it was a lifting, romantic melody that  immediately captured me -- unforgettable. It was a popular song in Cuba, descriptive of the writer's romantic vision of a young woman of Guantanamo. Over the years, the song became the framework for poets and musicians to express themselves. Often the expressions reflected a romantic closeness to the land, solidarity with common people and those who are less fortunate and oppressed, social sentiments, as well as capturing the tonality and melodic beauty of the place.

At a meeting of Interfaith Communities United for Justice and Peace (ICUJP), when the subject of Guantanamo prison was being discussed, Reverend Ignacio Castuera suggested that, "Fiske should write new lyrics to Guantanamera reflecting closing Guantanamo." I took the challenge and with the support of ICUJP, the result is this music video calling for America to shutdown Guantanamo Bay prison.

Guantanamo Prison represents the lowest levels that human intention and endeavor can reach. The violence, the war consciousness, the torture, the inhumanity, the violation of rights, the damage of the spectacle to our international relations, the cost in dollars, and the emotional and psychological cost to the collective consciousness of humanity should never be what a democracy creates. Guantanamo sits like a cancerous tumor metastasized through the military/industrial/corporate system, which builds empire through the war machine. Any righteous human being of conscience and some semblance of humanity would condemn the nightmare of Guantanamo.

Thank you for reviewing this video. Listen and watch and share it in your communities and circles, support peace and justice efforts, go to gatherings, and remember how Pete would say, "Sing it Out".  As President Obama inches closer to his pledge to close Guantanamo, may this work serve as some small catalyst in that direction.

Yours in Peace,
Stephen Longfellow Fiske

On this beautiful island
Where the shore meets the shimmering sea
There is a nightmare upon us
A deep plague on our humanity
A house of torture, of cruelty and pain
Which every day brings the USA shame

2.7 million dollars per detainee
454 million cost annually
taxpayers bilked for the spending
to see the war machine run without ending
only making our longest war longer
only inciting the hate to get stronger
(repeat chorus)